In the late 1600's and early 1700's Kung Fu became very popular at the Siu Lam (Shaolin) monastery in Honan Province, China. The Kung Fu exercises were designed to help keep the monks and abbots awake during long periods of mental training and meditation. By exercising their bodies as well as their minds they developed even further in their spiritual training. The Manchu (non-Chinese) government in the North at the time were deeply suspicious of such activities, believing the monastery to be training an army. They eventually attacked the monastery, burning it to the ground and killing many of the monks and disciples.

A few escaped the attack though, and they are thought to have been Buddhist nun Ng Moi, Abbot Chi Shin, Abbot Pak Mei, Fung To Tak and Master Miu Hin.

Ng Moi hid on Mt Tai Leung and it was there that she met Yim Yee and his daughter Wing Chun. Wing Chun was a beautiful teenager who had attracted the unwanted attention of a local man. Ng Moi liked Wing Chun and agreed to teach her Kung Fu to defend herself. After training Wing Chun eventually challenged her persistent admirer and beat him in a fight.

Wing Chun carried on training in Kung Fu and taught her husband when she married - Leung Bok Chau. He named the system after his wife and passed it on to Leung Lan Kwai. Leung LAN Kwai in turn passed the Kung Fu techniques to Wong Wah Bo who taught a man named Leung Yee Tai. Leung Yee Tai had already learnt a pole form from escaped Abbot Chi Shin, and thus the pole form was incorporated into the system. Leung Yee Tai passed the system to Leung Jan, a doctor of Fatshan, China. Leung Jan became an absolute Master of Wing Chun and defeated many challengers from other styles of Kung Fu. He taught everything he knew to Chan Wah Shun.

1950's and Yip Man To The Present Day Chan Wah Shun taught the system to a man named Yip Man, who attained the highest level of skill within Wing Chun and taught many people, including Bruce Lee in the 1950's in Hong Kong. Yip Man simplified the system, particularly removing the long and complicated names and is mainly responsible for the Wing Chun system as we know it today. He was a superb teacher and taught according to the individual's own skill and knowledge, adapting his approach where necessary. Wing Chun flourished in Hong Kong and Yip Man also passed his knowledge on to the likes of Wong shun leung, William cheung, Ip chun, Ip ching. 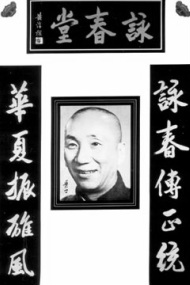 Copyright: All copyright © 2010 and other intellectual property rights relating to all content of this website is owned  by Hertfordshire wing chun. Copying, adaptation or other use without the written permission of Hertfordshire Ving Tsun is prohibited.